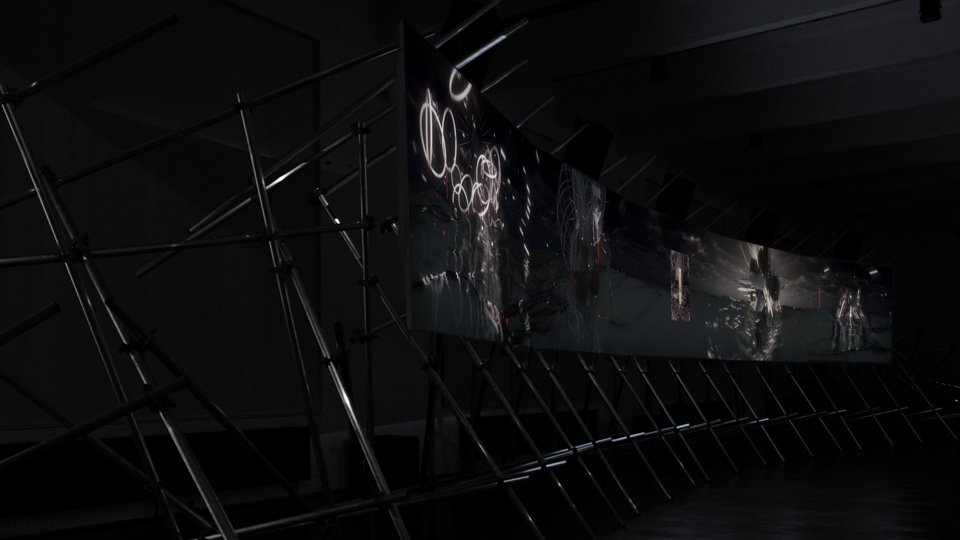 The Flood Panels is a 16m panoramic installation which deals predominantly with periodic movement. The tides, alongside the appearances of sun and moon and seasonal change are one of the most archaic rhythmical structures in human life and perception besides the human body itself. At the same time, the flood is almost like an antagonist to the substructures of buildings and settlements built by human beings directly into or close to large bodies of open water. It is playfully flowing around and scouring them, constantly challenging the structures’ stability.

As a figure of speech, the flood in its biblical context is synonymous with new beginnings and also the survival of a chosen group of species. Given the gloomy doomsday warnings surrounding the year 2012, this topical analogy may be regarded as a rather cheeky commentary on the artists’ behalf.

The Flood Panels is part of the work cycle Perpetual Verge.


The Flood Panels was commissioned by sound:frame. The sculptural screen was created by Gerald Moser. The ocean as a medium of the flood and source of all life is another important factor in this virtual drama, with all its romantic implications and elemental force. As much as the oceans are, in modern times, utilized and used as the embodiment of recreation, sounded as hindrances for data connections and movement of goods and exploited as a food source and huge dumpster at the same time, they have always been seen as a symbol for the big unknown, deep-sea monsters and nature taking vengeance on man’s disrespectful penetration of all environmental territories. In a time when tsunamis and flood disasters like in indonesia or japan seem to become order of the day it isn’t surprising that a lot of indigenous island people are traditionally rather awestruck by the sea and its power.

In this work, the flood is a macro-rhythmic time emitter, whose periodic movement is paradoxically mirrored and cyclically broken by arbitrarily programmed entities. Generative, abstract forms are continuosly mutating, their evolution confronted by semantic gestures. A weird dance, a canonical change is constructed via convoluted rhythmic structures and the interplay of specific elements, who condition and determine each other in partially chaotic coherence. The objects drift in some kind of mysterious limbo in their insular being at the verge of “beyond” and “beneath”, motivated to synchronize, always looking for friendly forces to increase stability and find peace. But the oscillating power of time is constantly putting a spoke in their wheel. The audience is facing a bizarre love triangle of form, movement and change.
DEPART conduct their shipwrecked protagonists in this digital intimate bathtub play as they see fit and thus manage to elaborate a suspense between reincarnations, permutations and the futile pursuit of stability in empiric matters.